Back to School Issue 2008
Montclair Magazine 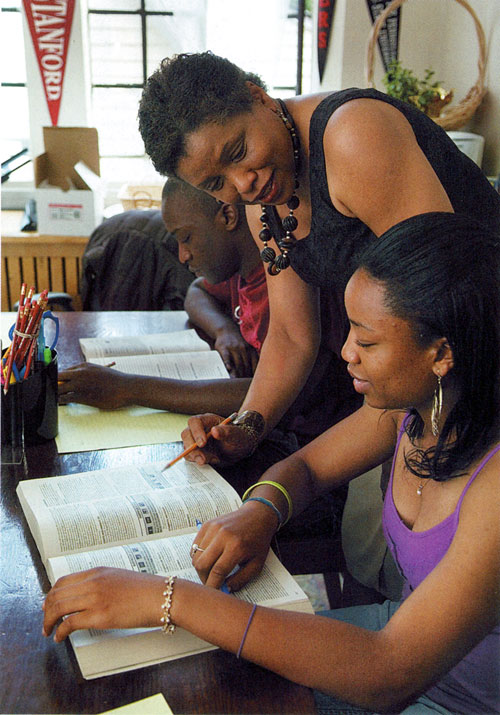 MISSION POSSIBLE: JoAnn McCullough, above, along with dedicated parents and teachers, is the driving force behind the College Advocacy Center. Photo: Greg Pallante

JoAnn McCullough, director of Montclair Public Schools’ Improving Montclair Achievement Network Initiative (IMANI), recalls telling a pastor about the missionary work she and her husband performed in Kenya when they were first married. “Now I understand how you’ve been able to do all you’ve been able to do!” the clergyman laughed. “You have the backbone of a person with a mission.”

Since IMANI’s launching in 1999, her mission, and that of her colleagues has been no less than this: to close the achievement gap in the pub­lic schools. To do this, the largely parent-driven initiative first focused on SAT prep at the high school. “We knew many students in our children’s classes were going out and getting extra help, and we wanted a level playing field for all our kids,” says McCullough.

With start-up funding and oversight from the Montclair Board of Education, she and other parent volunteers implemented a study group program that reached 30 to 40 students a semester. They then reached out to professional tutors from the community, who offered their services at steep discounts; high school teachers themselves followed, working overtime with students other than their own.

In 2004, IMANI opened the doors of the College Advocacy Center, housed in St. Luke’s Church in Montclair and funded through a grant from Bestfoods Educational Foundation. Here, mentors trained by the MHS Guidance Center go one-on-one with upperclassmen to help them apply to colleges. Two years ago, mini-IMANI extended its efforts to elementary school students, and the Initiative is launching a program in the middle schools in the fall, supported by a grant from the Schuman Fund. McCullough estimates that they now reach about 360 kids annually.

“We learned at MHS that students who challenged themselves upward felt isolated in class,” she says. “Students of color in these higher level courses need to understand that they’ll be in the minority. We want them to get to know each other early on, so they feel a sense of belonging.