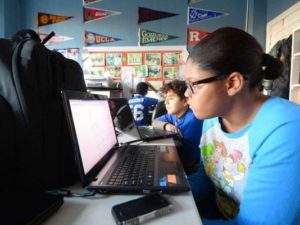 You hear it a lot: Learning to write computer code is the modern equivalent of learning to type.

Luckily the folks at the educational nonprofit IMANI — Improving Montclair Achievement Network Initiative — are already on the case. The group, now in its 17th year, has begun a series of computer coding classes for middle-schoolers, being held on Fridays at Renaissance Middle School at Rand.

“We’ve been thinking about a coding club for a long time,” said Savittieri. “We wanted to do something that was about developing critical thinking skills and creative skills, and something that students would enjoy – and not only positioning their programs around core academic subjects.”

The IMANI staff concluded that a need existed for a coding program by an old-fashioned method: they asked. “There were community members who did a letter campaign on behalf of IMANI as well as our advisory board,” explained Executive Director JoAnn McCullough. “We started to do research on what middle school kids needed. We first looked at the district for where the gaps in achievement were, and of course we found it to be English and math.

“We initially started a program at Glenfield School last year, and we realized that these kids needed more than just the basics in the areas of English and math. With the changing landscape, we needed more support in the area of technology.”

Savittieri pointed out that, like the typewriter analogy, coding is now an essential for young people thinking of a career. “A lot of educators are looking towards coding for career opportunities, because that’s where all their friends are going.

“You need basic coding skills, even for journalism,” she said by way of example. “If you were ever going to work with confidential sources, to be able to maintain confidence you would need to know coding as a journalist. Or when they do statistics for biologists, they just use coding to go through data entry.

“There are all of these jobs available now in computer science fields,” she summed up. “But also they’re going to be in all fields. So if you don’t know that, you’re really at a disadvantage.

“It’s not like a grand solution,” acknowledged Savittieri. “We’re doing our little part in this. That’s really our mission, to close the achievement gap in the Montclair school district.

“There a still a lot of problems. The access to Internet — even just basic Internet — is divided according to socio-economic status and race. And if you don’t have good math skills, coding is harder because it is about math in its theoretical form.

“It’s like learning a new language that is built around logic and reason,” she said, “and creation of what you can imagine some things being. We were working with programs called Kodu or Minecraft, video games, creating these alternate realities. But this is going beyond the video game component and asking ‘How do you give a computer instructions to understand the directions that you’re giving it?'”

Savittieri said that another challenge is — because they’re working with sixth and seventh graders — not just a digital version of doing chores. “We’re doing a lot of field trips to Montclair Art Museum,” she said. “They’re going to do a field trip where we do a workshop in comic-book creation, with an illustration software being the next activity. And we’ll be going to Montclair State to do a workshop on journalism, coding and showing that technology in context. Technology is related to everything that we interact with now, and that’s something that parents can kind of understand. But they don’t really understand that for kids who are 10 years old today, that’s what it will be like in 10 to 15 years.”

With 12 students currently in the program, McCullough is looking ahead to growing the class to meet the needs of more students. “This is a pilot,” she said. “We’re really hoping that in the future we can offer this to more students. Once we understand what works and what doesn’t, and we work through the glitches, we’re hoping that this becomes permanent.”

For now, the IMANI coding program is in mid-semester, and is planning on rebooting another series in the fall. In the meantime, they are busy drumming up donations to keep the program moving, and recruiting volunteers to teach what they hope is an expanded program. Those interested in either donating or volunteering can get details at imaniprograms.org, by emailing imani@imaniprograms.org or by calling 973-509-2822.

In any case, the IMANI team are convinced they’re on the right track, and are dedicated to closing the gap for all students. “We’re so excited,” said McCullough. “The more I’m doing research, the more I’m feeling like this is where we need to be.”