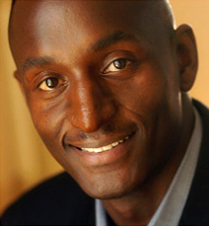 Randal Pinkett, winner of the reality show “The Apprentice” with Donald Trump, will be the guest speaker at a cocktail party to benefit IMANI on Saturday, Oct 3.

Pinkett is an entrepreneur, Rhodes scholar, and author. He is the co-founder, chairman and CEO of BCT Partners, a management, technology, and policy consulting firm based in Newark.

A public speaker for corporate, youth, and community groups, Pinkett has been featured on The Today Show, Live with Regis and Kelly, and CNN; and in The New York Times, The Washington Post, and other papers. He is a regular segment host for CEO Exchange on PBS.

Pinkett’s degrees include a Ph.D. from MIT Media Laboratory, a master of business administration from MIT Sloan School of Management, and a master’s degree in electrical engineering from MIT. He was a Rhodes Scholar at Oxford, and eared his bachelor’s degree at Rutgets.

Pinkett is the co-author of several books, including “Black Faces in White Places: 10 Strategies for African Americans to Redefine the Game and Reshape America.”

IMANI also runs a community-based College Advocacy Center that assists students and parents in the college application process. In 2004, it launched a literature program for elementary school children, and in 2006 a program for middle school boys of color.